Orca3D uses the resistance prediction technique of Holtrop and Mennen [1] for performance estimation of vessels operating in the "displacement" speed regime. This method is well-established and widely accepted for use in the early design stage of displacement hulls. The semi-empirical regression technique uses a variety of parameters describing the shape and characteristics of the hull form as input. Most of these parameters are well-defined and easily derived from the vessel geometric representation in Rhino. However, there area few input parameters whose definition is more subjective and for which there may not be universal agreement. Differences in these parameters will of course cause some difference in the resultant predictions from otherwise identical implementations of the Holtrop and Mennen method. The specific parameters in question include waterline half entrance angle, immersed transom area, and stern coefficient. The approach used in Orca3D for computing these "derived" parameters is described below:

1. The waterline half angle of entrance (IE), is generally thought of as the angle that the forward end of the waterline makes with the ship centerline when viewed in plan. It is intuitively clear to most why this angle will have a significant impact on the resistance of the ship, as full-bodied vessels with bluff bows exhibit larger drag then slender vessels with a fine entry. However, when computing IE from a three-dimensional geometric representation of the ship, the details of the shape of the waterline forward can have a large impact on the result, depending on the algorithm used. For example construction details may require that the stem of a vessel has a rounded shape to it, such as an elliptical waterline ending. Some smaller vessels may have a flat waterline ending (i.e., perpendicular to the centerline) for structural strength purposes. If one were to take the definition of IE literally, the entrance angle at the forward most point for these examples would be 90 degrees. These local details are not intended to be included in the computation of IE as input to the Holtrop method. Orca3D addresses this by instead evaluating the waterline angle to centerline at a modest distance aft of the stem. This has shown to give representative results for use in the Holtrop and Mennen method.

2. Although the definition of the immersed transom area may seem clear at first, it is often thought of as the area of the station at the aft end of the static waterline, certain details in the geometry of the afterbody can have a significant impact on this computation. For example, consider a ship with a planar transom that is inclined aft so that in profile the bottom of the transom is located forward of the transom at the deck. If the static waterline is such that the bottom of the transom is immersed, a station cutting through the aft end of the waterline (which is somewhere up from the transom bottom) will have zero cross sectional area. However, I think most naval architects would agree that in terms of the flow of water around the transom there would likely be a significant non-zero immersed transom area. Similarly imagine a boat with a circular transom in plan view such that the transom shape represents an arc of a circle. While a station through the aft-most point on the waterline would show zero area (or very nearly depending on tolerances), practically speaking there is a non-zero area when you cut a station just forward of this location, say at the transom side edges.Orca3D implements an algorithm searching for an "abrupt" change in the slope of the sectional area curve near the aft end of the ship, obtaining in effect an "effective" transom area in these cases.

3. The Holtrop and Mennen method relies on a parameter describing the general afterbody shape of the hull form known as the stern shape coefficient, Cstern. Not surprisingly the afterbody shape has been found to have a significant affect on total resistance of the hull. The definition of Cstern and how it relates precisely to the three-dimensional geometry is somewhat nebulous. Various descriptions and images have been presented in the literature such as the one shown below. Relating this description to three-dimensional geometry requires some way of numerically evaluating the model shape. Orca3D implements an algorithm based on the vertical prismatic coefficient of the afterbody of the vessel with fuller form afterbodies tending to have larger Cstern values. It is strongly recommended that for an individual resistance analysis in Orca3D, the user review the automatically computed Cstern to determine if it seems reasonable and adjust as needed. 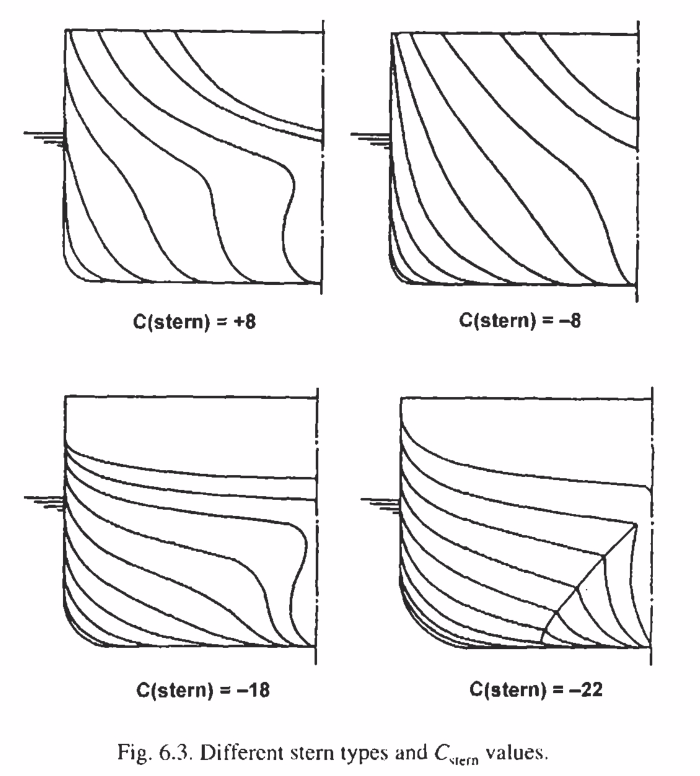