Including the Effects of a Nominal Wake Fraction Print

Orca3D Marine CFD includes the ability to perform self-propelled (also known as "powered") simulations. For self-propelled simulations the thrust and torque associated with the propulsor(s) is/are approximated through the use of an actuator disk (Hough-Ordway) that imparts both axial and circumferential acceleration to the fluid flow within the disk volume. The magnitude of the actuator disk influence is determined from the open water propeller performance, represented by thrust (Kt) and torque (Kq) curves both as a function of advance coefficient, J. The advance coefficient is defined as:

where n is propeller rotation rate in revolutions per second, D is propeller diameter, and Va is the speed of advance. By default, the speed of advance is assumed to be the same as the free stream velocity for the simulation. However, if an estimate of the wake fraction, wt, is available you can modify the default behavior to include the effects of wt on the computed inflow velocity. To do so:

1. Open the Simerics Propulsor Performance dialog which is where you enter the performance characteristics and rpm of the propeller. This is done by clicking on the "Propulsors" tab of the Orca3D Marine CFD dialog, selecting the propulsor in the list and clicking the "Performance..." button as shown below.

2. Next click the checkbox control to "Specify Wake Fraction". Then enter a list of speed-dependent values for 1-w as shown. If you only enter a single value, it will be used for all speeds.

3. If you have multiple propellers you will need to perform this process for each of them to account for the local wake fraction.

If you want to used Orca3D Marine CFD to compute the wake fractions, you can estimate nominal wake fractions using the approach described in the article, Simulating a Propeller Wake Survey 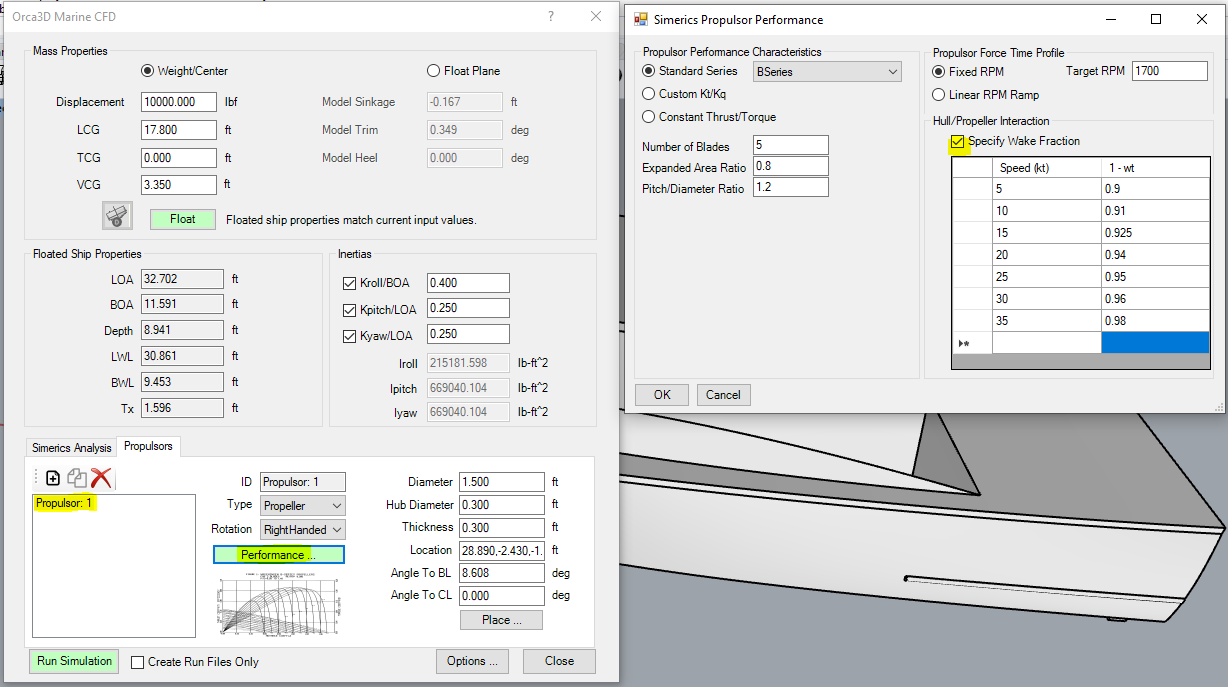