The process of extracting wave cut information from the results of a CFD simulation is very straightforward, albeit not yet automated in Orca3D Marine CFD. The are two approaches to extracting this information, and both are described below.

In the first approach, the first step is to define the planar section in SimericsMP at which the wave cut is to be measured. As shown below, the circled icon in the Geometric Entities panel should be used to create a section, here called Section 01. By selecting this section in the tree, you can set its properties in the Geometry tab of the Properties panel. Here we set the plane to be a constant Y plane located at a y value of -2 m. Finally, by choosing to display "Component water: Volume Fraction" in the results panel, you can see the wave cut on the new section as shown in the second image below. 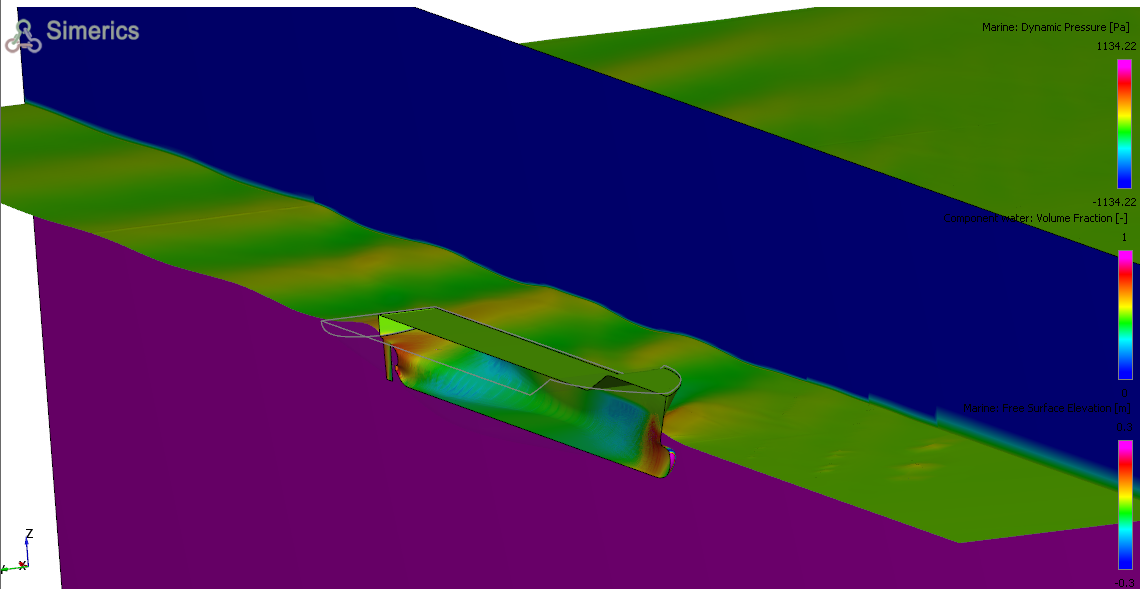 Once you've defined the section in SimericsMP, place the section in a profile window in the graphics view and save an image of the view to your hard drive using the Windows snipping tool.

Next, open Rhino and use the Picture command to import the saved image and scale it so that it matches the scale of the model that was run in the CFD simulation.

The final step is to use the Rhino InterpCrv command to trace a curve over the wave cut as shown below. Once you have the curve in Rhino you can measure it interactively at any location or divide it evenly spaced points and export those point positions to a file for additional post-processing.

The second approach to extracting wave cut information involves exporting the SimericsMP free surface mesh to a file and importing it into Rhino where the mesh can be intersected and measured. Note that this process requires the used of the SimericsMP beta version. Contact Orca3D, LLC to get a link to this beta version if you do not already have it.

The export process is very simple but somewhat limited in terms of the user interface. To export a free surface:

1. Run the beta version of Simerics, and open the simulation.

2. In the Geometric entities window select the Free Surface

3. In the Geometry tab of the Properties panel you will see a new entry called "mark_for_export" as shown below. Click the dropdown that says No and click Yes.

4. In the File menu, select Save Animation, and select the results file (.sres) for the condition that you want to export (normally the last .sres that was saved). Click Open.

6. The stl file with the free surface will be created, with the file name that you entered, appended with "_Free_Surface_xxxx," where xxxx is the time step of the .sres file that you selected. If you selected multiple .sres files in Step 4, then multiple stl files will be saved.