One of the results of a CFD simulation that is often of interest is the flow velocity visualization. This is commonly displayed using a combination of false color maps showing flow velocity magnitude and flow vectors where the vector direction represents the local flow direction and the vector length is proportional to the magnitude of the local flow velocity. This is easily accomplished in SimericsMP by selecting a boundary or derived surface and enabling the required settings. In the image below, we've selected the marine_symmetry boundary in the Geometric Entities panel and then in the Results panel selected the Derived Variable "Velocity Magnitude" as the display variable and enabled the "Surface" and "Vectors" checkboxes. 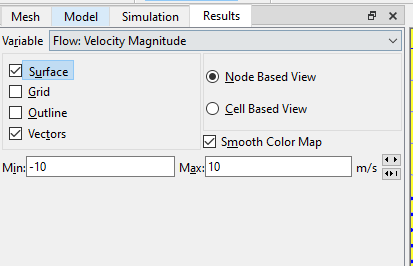 The results are shown in the image below. Note that we've performed the above process for two graphic views of the model since the settings are dependent on the view. We've also selected the model boundaries after changing those settings so that the model is visible as well. 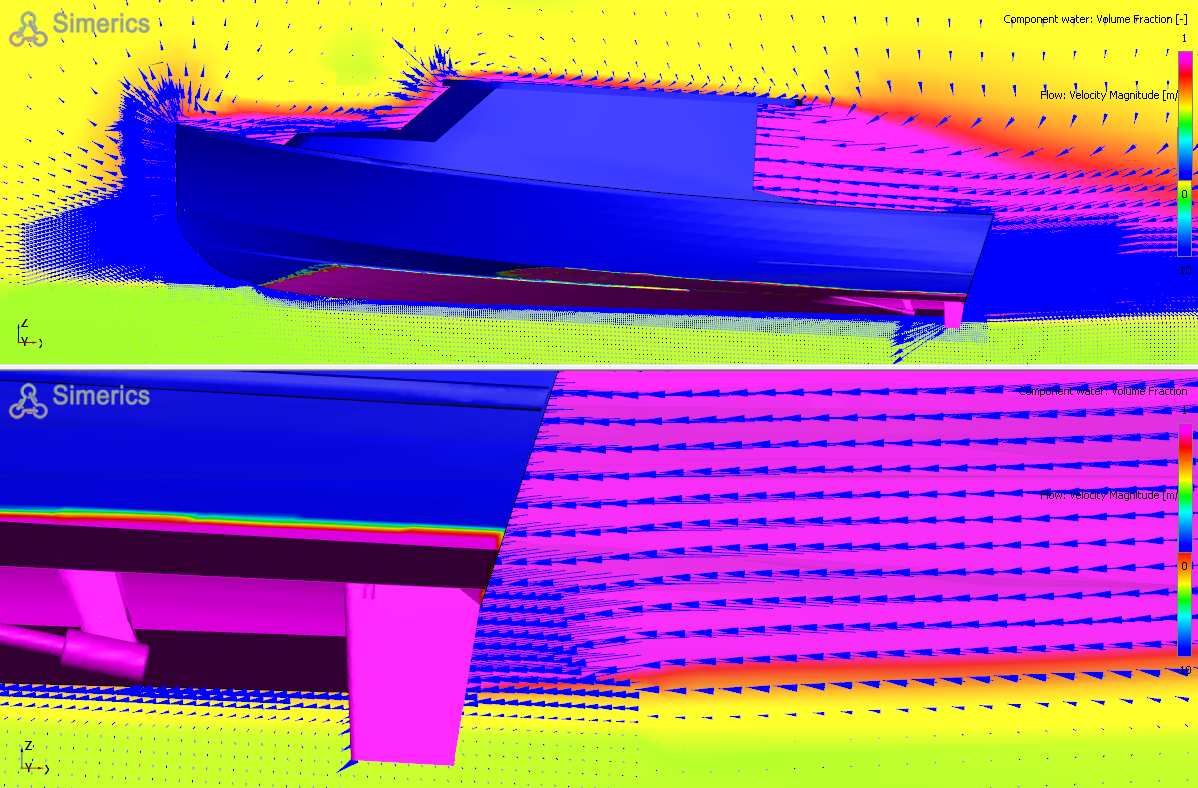 A common question about the flow vectors shown in the above image is "why are the flow vectors pointing forward (right to left) when the fluid flow is traveling aft (left to right)?" The answer has to do with the coordinate frame of reference. When you observe the simulation progressing you see that the boat is not moving longitudinally, but the water appears to be moving past the boat. It's as if you were in a reference frame that was moving with the boat. However, imagine instead that you are observing the simulation from a nearby stationary vessel watching the boat go past. Now you are in the inertial reference frame (world coordinates). From that vantage point, flow that is very close to you (and substantially far from the passing vessel) is not moving at all and the velocity vectors would have zero length. As you moved closer to the passing boat you would find that the fluid was actually moving in the direction of the boat until at the limit if you could observe a fluid particle in contact with the boat it would be moving at the boats velocity. This inertial reference frame is the one that is used for the velocity vector plot.

All is not lost though, because if you would prefer to see the flow vectors in the reference frame moving with the boat you can simply define a custom display variable. To do this, open the Expression Editor and define a new display variable as shown in the highlighted line below. 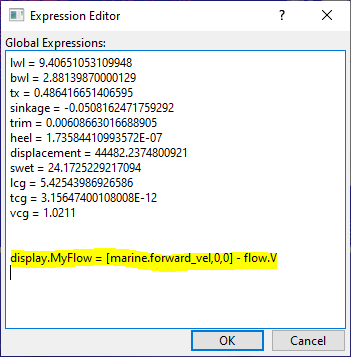 After closing the editor you will need to continue the simulation in order for this new display variable to be computed. Now select the marine_symmetry boundary again and in the Properties panel change the Vector variable from "Velocity" to the new user-defined variable "MyFlow" as shown in the images below. 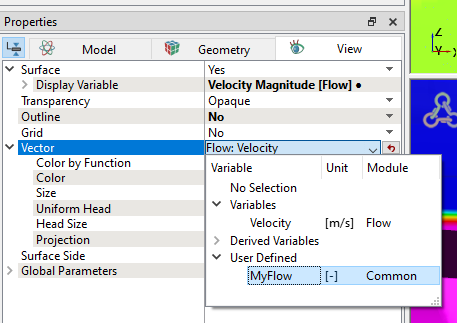 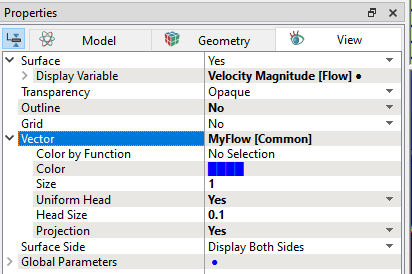 The result is provided below. Note that I did not change the Surface display variable so it is identical to the prior display. However since I changed the Vector variable all of the flow vectors are now pointing aft. Furthermore their lengths are generally greater than before since they tend to be around the boat speed versus closer to zero. Note that in the lower view in the image I had to significantly decrease the scaling "Size" of the vectors to make them viewable from a practical perspective. 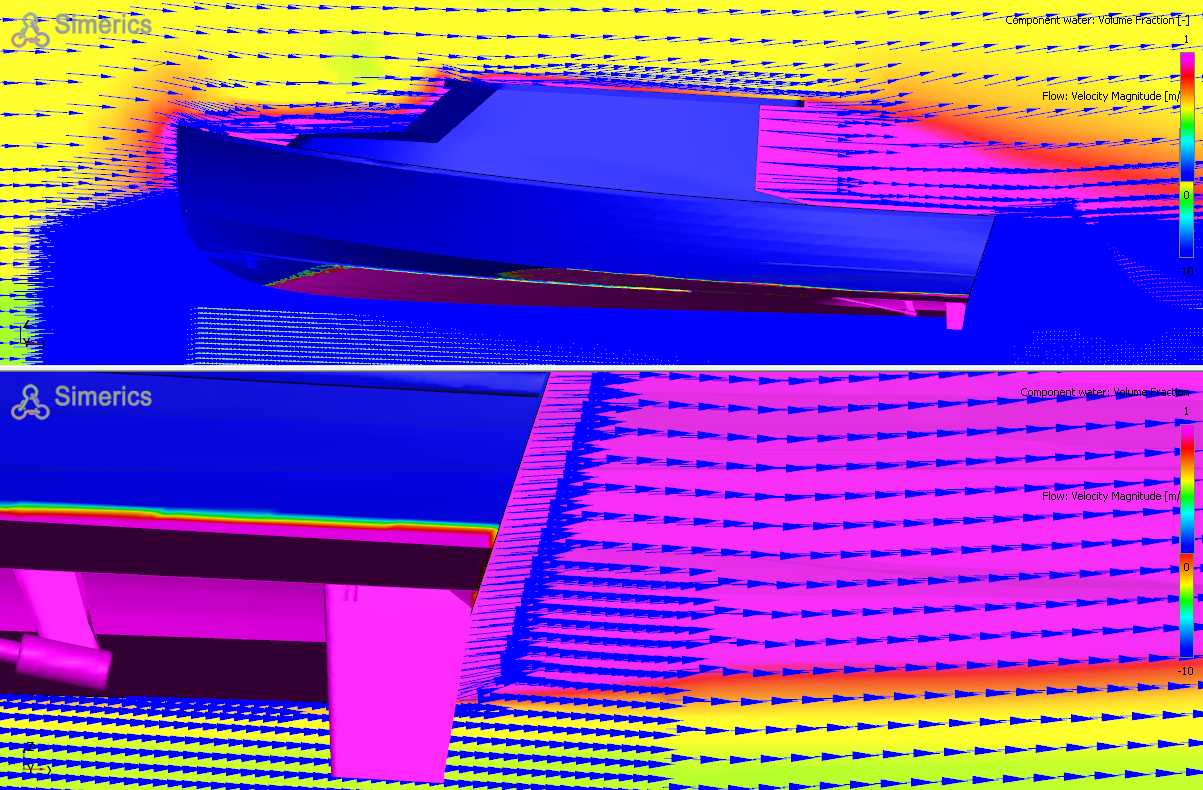 Hopefully this addresses a common question that comes up when displaying flow velocity vectors with Orca3D Marine CFD. As always, if you have any questions about this or anything else related to Orca3D please send your question to support@orca3d.com..