Partial length chines (longitudinal chines that start at one end of the hull, typically the stern, and fade out at some longitudinal location) are becoming increasingly common in a number of yacht hull applications. Rhino and Orca3D offer several tools and techniques to help the user model partial chines, and these are described in the following discussion.

When it comes to advanced modeling, the first place to start is to make sure that you have a thorough understanding of how NURBS surfaces work and how they are manipulated within Rhino. There are a lot of resources available on the web, and here is a link to an introduction to NURBS article that is very well-written: http://www.mactech.com/articles/develop/issue_25/schneider.html

As for the problem of the partial chine, there are a number of different ways to work with it, including using multiple surfaces.

First, let’s just work with the single surface approach. The first step is to insert a chine using Orca3D’s “OrcaInsertChine” command. This will result in three rows in the control net, where there was just one before (see “Inserting a Chine” in the Orca3D Help). At each column in the control net, if all three control points (the point at the chine itself, and the points immediately above and below it) are moved as a group, the surface will remain smooth (i.e., they will maintain tangency or slope continuity). However, once one of the three control points is moved without the others, a slope discontinuity (chine) will be created in the surface. Therefore, a disappearing chine can be created by manipulating the control points in this manner on some of the columns, but then not disturbing the relationship of the three points on other columns (by selecting them as a group before moving or rotating them together).

We have various commands available to us in Rhino for editing and smoothing a surface. One of the methods for editing control points on a surface is to use the “MoveUVN” command. This allows us to grab as many surface control points as we’d like and move them in parametric directions across the surface instead of in world coordinates. Let’s say that you want to make a hollow near the bow where you already have the partial (smoothed) chine passing through. If you grabbed a point on the chine as well as the adjacent control points above and below the chine, you can move them in a group either in the U or V parametric directions or normal (N) to the surface while keeping the geometric relationship between the points. Please note that “scale” in the command refers to the maximum amount that the sliders can move the points in document units, so that will need to be updated appropriately. “MoveUVN” also has “Smoothing” sliders, which incrementally move a control point(s) into a straight line with respect to the adjacent control points in either the U or V parametric directions. As the simplest way to ensure tangency across a knuckle in the surface is to create a straight line of control points across the knuckle (see ‘food for thought’ below), you can use this or the “OrcaStraightenPoints” command to create a straight line of control points through the chine where you want it flattened. Note that this approach does not guarantee curvature continuity across the knuckle, however, the curvature discontinuities across the knuckle are not likely to be large and can be faired out if desired by viewing the curvature maps of surface isoparameters in way of the knuckle and editing the second control point above and below the knuckle row.

What if we tried using multiple surfaces? We could make up an entire hull form with three surfaces: bow (no chine), aft body above chine, and aft body below chine. This can take more time, because we would need to make three distinct surfaces and mate them with untrimmed edges. However, you might start with a single hull surface and split the surface transversely and longitudinally as shown below to obtain a topologically consistent model. Assuming that we get that far, now we have the option to keep both aft surfaces in positional continuity with each other while working with tangential or curvature continuity between the aft surfaces and the forward surface. Now, we know exactly where our chine will end and we continue to have control over the forward (bow) surface. While doing this, you should use the “MatchSrf” command to ensure continuity across surface boundaries. 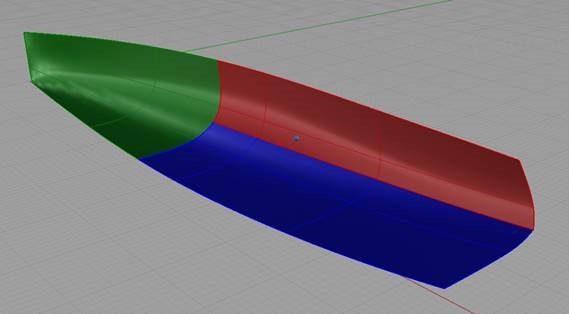 Finally, another option is to look into trying the Rhino plugin T-Splines, now owned by Autodesk. T-spline surfaces do not have all of the restrictions imposed by NURBS surfaces and allow for discontinuous rows and columns of control points, meaning that you can explicitly have a disappearing chine within a single surface. Their website is https://www.tsplines.com/.

Finally, we offer this brief review of surface/curve continuity as just a little food for thought; let’s assume that we have two 3rd degree curves that we want to match tangent to each other. At the ends of the curves, each curve is coincident with its last control point (assuming they have open knot vectors as is typical for Rhino curves), while the control point next to that controls the slope of the curve at the end. If we match the two ends of our two curves together, they may or may not be tangent to each other. Now, if we take the adjacent control points to our matched end and move them into a line with our end points, we are guaranteed tangential continuity across that connection. We may not have curvature continuity (the next level of continuity from tangential continuity) with this, but we will not see a knuckle between the two curves either. The figure below can be helpful when thinking about how to hand-fair the chine into a clean surface. 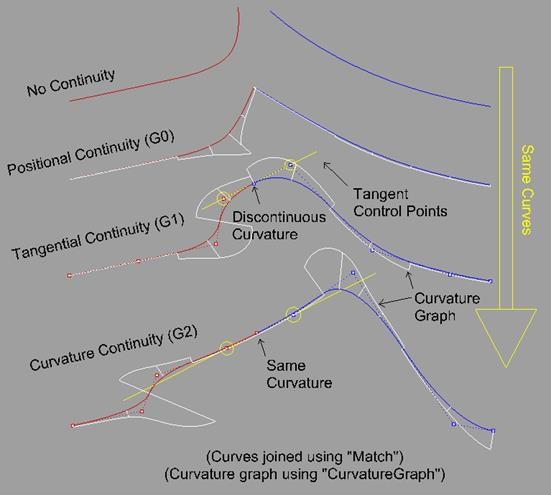 We typically model “fair” 3D structures as a 3rd degree NURBS surface (some structures like car bodies or jewelry use up to 5th degree). The “order” (= degree + 1) of the NURBS object is directly related to the extent of the surface influenced by each control point, and while there is more to it than this, we can safely say that the order of the NURBS object tells us the number of adjacent control points that have an influence over the shape of the object at any one parametric point. In short, with a curve with order=4, if you pick and move a single control point, the curve will change up to (order/2) = 2 control points away on either side. We make use of this property to determine where we want our chine to disappear. To demonstrate this, the figure below shows a smooth sailboat hull with a chine inserted, and just one control point on the chine moved. You will see that this made a distinctive chine at the one point pulled far away from the hull, and this chine seems to disappear between 1 and 2 control points away from the irregularity. As previously described, we know that the chine is fully faired back into the hull by the 2nd control point away from the irregularity, because this is a 3rd degree surface.